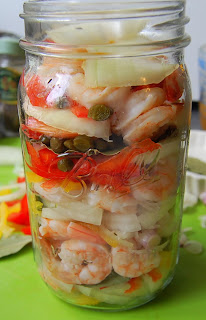 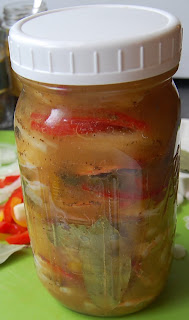 If you've never had marinated shrimp and peppers like this, you're in for a rare treat. In Louisiana it's more often referred to as pickled shrimp, but I feared the dill-pickle connotation might taint an otherwise marvelous dish. We'll call it marinated, which it is, and you'll savor every last morsel down to the tiniest caper at the bottom of the jar. When I prepare this I usually make at least one small jar as a gift for some lucky friend that week who really appreciates such a hard-to-come-by treat. 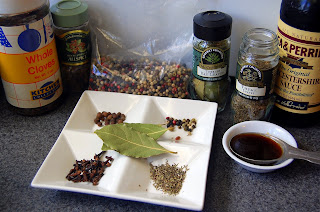 There are two layers of complex flavors working here and the first is in the boiling brine for the shrimp. Before the shrimp ever touches the water, we'll boil it 20 minutes to develop the brine with these ingredients (yep, it's quite a list - don't leave anything out and the end result to be well worth your while): 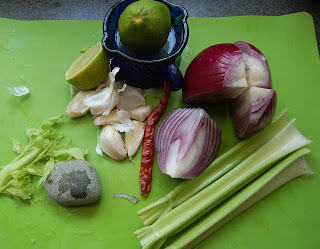 Add these to a large pot with 10 cups of water, bring to boil and simmer 20 minutes. 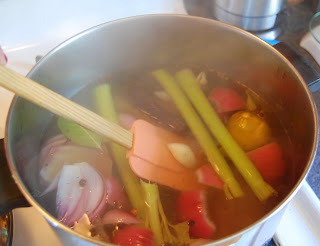 Into the cauldron of brine, add 2 to 2-1/2 pounds raw peeled shrimp and immediately lower the heat to the very gentlest simmer. Shrimp cooks very quickly and we want it to have time to absorb the flavor of the brine without getting tough. Let it cook very gently for 12-15 minutes.

While it's cooking thinly slice red, orange, and yellow sweet bell peppers. Also thinly slice a large Vidalia onion and assemble the other items which will be layered with the shrimp: 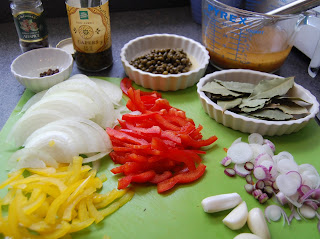 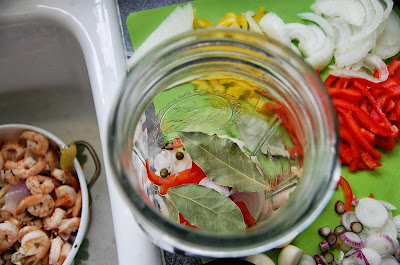 I usually start with a clove of garlic, using just one of those per jar. Next a layer of onion and peppers, then shrimp, a sprinkle of capers, and finally a bay leaf or two. Just keep following this pattern, pressing down to compact everything about halfway through. 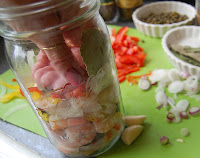 When the jars are filled to the top it's time to make the marinade and finish them off. You may like this blend so well that you find other ways to use it! (Like this jar of colorful peppers only.) It's basically a very flavorful vinaigrette that works for pickling any vegetable or as a salad dressing. 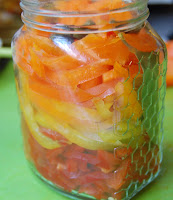 1-1/4 cups Canola Oil (normally I use Olive Oil for everything, but this is one time that Canola is better)
3/4 cup White Vinegar 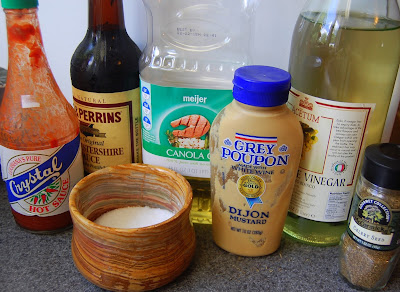 Whisk together in a large measuring cup until well blended. Pour slowly into each filled jar to completely cover shrimp and all ingredients. It may help to use a chopstick or thin knife along the inside wall of the jar to ease the marinade through the layers with no air bubbles. Everything should be submerged at the top also. Refrigerate for at least 24 hours. It will keep at least a week or more. This is delicious as an appetizer as is. Or spoon some over a green salad with just a bit of the marinade for a supreme lunch dish! 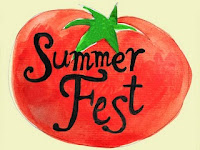 Check out these other delicious ways with peppers and keep checking back in each week. All summer long we'll be blogging together with the Food Network to celebrate SummerFest with loads of ideas for your Farmer's Market finds. Stay tuned for the fabulous fig next week!

Jan Hall Burke
Louisville, KY, United States
How do you lose 60 pounds when you love to eat and manage to keep it off? You'll find my story if you click "About Me" on that Tab Bar at the top.